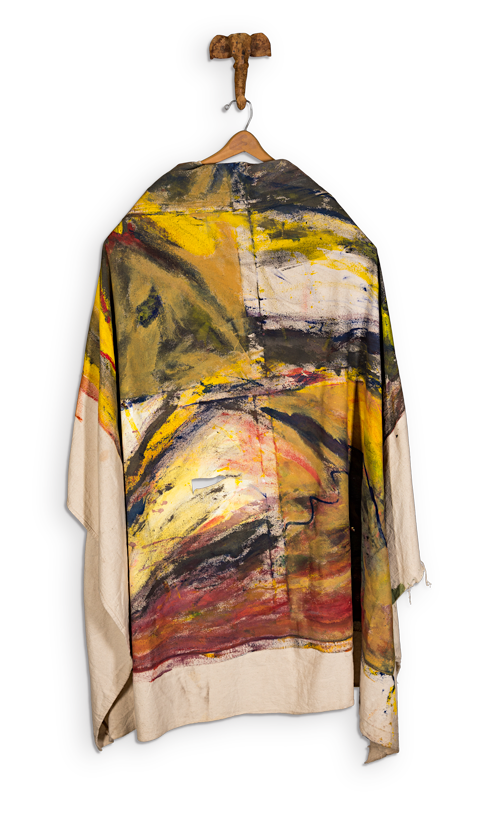 Background on the inspiration and creation of Battle Weary.

This is a very personal piece from a stark and challenging (at times desperate) period in my life.
In June 2008, I left family, friends, and work at my home in California to go all-in and follow love to move to Minnesota. I was smitten and chased a dream; “tilting at windmills” like my dad did long ago. By 2009, things had crashed and burned all around me; finances, that love love thing, and even my painting felt bleak (or worse). I felt shipwrecked and marooned.

I started this piece as a painting in 2009. I was disappointed. I tore it off the stretcher. In 2011, I saw new hope for it as register for that period and to honor the tough times people go though and the possibility of a better future.
Battle Weary is about just that. The metaphor of a medieval aging warrior returning from yet another brutal battle. Broken and scarred, but still standing. Hanging up the armor once again. Not throwing it out, because of course there will be more battles. It isn’t just about a warrior of the crown or state; it’s also about clergy, cleric, and citizen hanging up the cloak after an equally grueling test of faith. It’s about struggle, hope, and the possibility of resurrection and redemption told in myriad myths; The Phoenix, Christ, Achilles, Groundhog Day, etc. Many have said in different ways, the possibility of the future is built on hope. Hope to intention to action build the future.

This piece was publicly shown in 2011 and 2017. It was purchased by a collector who was, for ten years, the personal stylist for the late local artist, Prince.